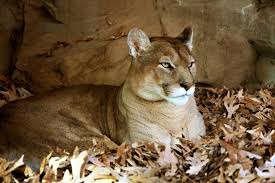 The Mountain Lion was once found all over the United States in varied habitats but because it has now become an endangered species they are solely found restricted to the wilderness areas of the American West, southern Florida, the Okefenokee Swamp and the Blue Ridge mountains. Mountain Lions are the largest wild cat found in North America weighing 80 to 200 lbs. Mountain Lions begin breeding at 3 years of age and will breed in any season but the peaks for breeding are in April and May. A litter can consist of 1 – 6 kittens and is born 82 – 98 days after mating. Kittens begin eating meat at 6 weeks of age but will not kill until they are 2 years old. The Mountain Lion generally hunts at night and prefers to eat Deer but will also eat Wild Pigs, Raccoons, Armadillos, rodents, and rabbits. After killing a large animal such as a deer or pig, the Mountain Lion may cover it with leaves and other debris after the initial feeding, then come back later to finish eating. The Mountain Lion requires a large territory for its individual home. Home range size may be from 5 – 24 square miles, depending on the abundance of food, habitat, and the individual’s reproductive condition. Females with young require larger territories than females without young and males and females may share the same home range, but individuals of the same sex do not. Mountain Lions avoid close contact with other Lions by leaving scratch and scent marks to tell others that this territory is occupied. Deaths are generally caused by injuries from large prey, fighting with other Mountain Lions, and disease. The Mountain Lion is a protected endangered species and is not allowed to be hunted. Occasionally a Mountain Lion is sighted in the North Georgia mountains, but the exact population is unknown.