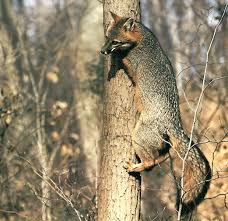 The North Georgia Mountains are home to two species of fox the red fox and the grey fox.

The grey fox also known as the forest fox is gray in color with patches of reddish fur on the neck, flanks, legs and underside of the tail. A black stripe runs along their back down to the tail tip. Grey foxes weigh between 8-12 pounds and are 34-40 inches in total length. The association of the gray fox with forests may be based on the gray foxes ability to elude predators such as predatory birds, coyotes, and bobcats by climbing trees. Even though gray foxes are associated primarily with forested areas they are also found along woodland edges and around urban/suburban areas. Gray foxes can be quite territorial spending most of their life in a one square mile home range.

The red fox has a deep reddish brown to yellowish red color with a bushy red tail tipped with white. Red foxes weighs between 8-14 pounds and are 36-45 inches in total length. When preyed upon by coyotes, bobcats, and predatory birds red foxes utilize their speed and endurance to elude predators. Red foxes are commonly found in areas of mixed pine-hardwood forests interspersed with fields, cropland and grasslands. Red foxes are also very common in urban/suburban areas throughout North Georgia because of the abundance of food in these areas and their adaptability. Their home range and territories overlap and vary in size depending on the red fox population densities and food abundance.

Both the red and grey fox are considered carnivores as their diet includes rabbits, rats, mice, squirrels, birds, and insects, however they also will eat vegetation including all types of fruits, nuts and berries. The mating season is also the same for both the red and grey fox running from January through April. The grey fox gives birth to 2-7 pups and the red fox gives birth to 4-5 pups. Foxes are considered to be monogamous and both male and female gray foxes work together to raise pups until the pups become independent after about 3 months of age.

Because of the adaptability of both gray and red foxes they are quite common in cities, towns, subdivisions, and even near rural home sites as well as in their natural habitat. Although foxes are primarily nocturnal hunters it is not uncommon to see a fox during the day. If you do see a fox during the day in either the woods or in your yard the best thing for you to do is to simply leave it alone. You may want to remove any bird feeders that may be attracting mice and birds to your yard which in turn attracts foxes.